This is probably my last night here as a citizen. My family’s been coming here since my aunt worked in Italy in the 70s. It’s a modest, friendly ex-mining village in a beautiful corner of the Alps: lovely for walking in the summer and cross-country skiing in the winter. It has a downhill slope too, which is OK but not great. And good mountain-biking, if you like that kind of thing. It’s unpretentious. It’s not expensive, as these things go. Some crazy Brits and others come to risk their lives climbing frozen waterfalls but most the people who come here are Italian. It’s very white and I’d guess a fair few residents voted for the fascists of La Lega. There’s some poverty. People are generally kind, and go out their way to be helpful. There are things that drive me crazy and many things I love, the same as in the UK.

We have long-standing friends here. We always stay in the same apartment. My aunt knows most the village. I haven’t been coming here as long as her but when I go to the shops I meet people I know. My aunt comes here twice a year, and after she retired she spent 11 months here. She sometimes gives free English lessons. And when she’s been ill, or had a problem with the car, or had any other kind of trouble, there’s never been any shortage of help. We’re not locals, but we feel at home here. And of course we share citizenship. You see more regional than national flags here, and you also see plenty of EU ones.

Citizenship, as a concept, is by no means the most important aspect of Brexit. The dark money, the lies, the corruption of democracy, the callous disregard for peace in Ireland, the ripping away of rights from non-British EU citizens living in the UK, the appalling lack of planning and foresight, the cynical stirring up of race-hate, the attacks on our rights and protections, the effective suspension of functional government… all these are much worse. The fact that we are creating a divided, dysfunctional country and picking fights with former allies, instead of uniting to face global ecological catastrophe… that is much worse. But tonight I’m going to allow myself to reflect at a personal level, and tell you that I already grieve for my loss of citizenship.

Look at history and you’ll see that people have gone to war for less. But we’re to have it torn away on the back of one undemocratic, uninformed vote. So what is it, this citizenship that I’m soon to lose?

We Brits are European, geographically and culturally, whether we want to be or not. Some of us may be Bangladeshi-European, or Kenyan-European, or Canadian-European, but if you live in Europe you are part of what defines Europe. That’s what the new wave of European identitarians, like Salvini here in Italy, do and do not understand: they know that it’s the people that define the place, and that a mix of races is slowly and wonderfully redefining Europe as a multicultural continent. They know that all too well, and they fear it. But what they don’t understand is that their last chance for a white Europe was nearly a century ago. And they lost. All they can bring now is division and chaos, along with (intentionally or not) golden opportunities for disaster capitalists and free-market ideologues.

As for the UK, leaving the EU will not change our Europeaness: leaving is simply an act of self-deception. Likewise, the EU’s faults are only reflections of our own European faults. The EU may be too protective against non-European migrants, but that’s because our culture is. The EU may be too wedded to neoliberalism, but that’s because our culture is. In fact, if you look at the Brexit agenda, post-EU Britain is set to become even more racist, and even more tooth-and-nail capitalist than it is now. We’re not going to change those things by walking away; we might be able to change them through solidarity and co-operation.

And tonight I specifically mourn for the loss of citizenship because the next time I’m here, short of a miracle, I’ll be a foreigner. I know my loss is nothing compared to what non-British EU citizens living in the UK have to deal with, or those devastated by job losses as firms flee the country, but still I feel a strong sense of injustice. What have I and others like me, who have a simple, honest sense of belonging in Europe, done to have so many rights, freedoms and protections taken away like this?

Actually, I think I know the answer. The elites who stand to gain from escaping EU regulation (which is what, in truth, Brexit was always about, until it was hijacked by its own nationalist propaganda) not only whipped up xenophobia to help their cause, but also fostered a kind of trumped-up class antagonism, underpinned by Gove’s infamous dismissal of expertise. The heart of this resentment is the demonisation of the ‘metropolitan elite’, a phrase that, especially when paired with that other phantom of the far-right imagination, multiculturalism, seems to echo the antisemitic trope of the ‘cosmopolitan elite’.

I’m clearly one of those monsters. Oxbridge-educated, middle class and Guardian-reading, I even – gasp – bothered to read as much as I could of what those terrible fear-mongering experts wrote about Brexit. I’m one of the bogeymen that Farage literally incited people to hate. But my mum’s family were all migrants and my dad grew up in poverty. They gave me a middle-class upbringing and I managed to go from a comprehensive school to Oxford. Are these not positive achievements? I’m not asking for sympathy; at least not for me personally. Brexit will create some added hassle for my work and travel but others will suffer far more. I am also fully, indeed painfully, aware of my privilege. My point is that we are not the bad guys in this story. We’re all doing the same really: using our wits to improve our lives and make the most of opportunities that come along, while trying not to harm anyone else, and maybe make things a little better for other people. Except that in the fantasy land created by the propagandists of Brexit, we are the bad guys, and I thoroughly deserve any future impediments to my shockingly cosmopolitan, elitist lifestyle.

Well, if that’s what you think, listen up. My family escaped poverty in England on the one hand and pogroms in Eastern Europe on the other: now we have a decent life. That’s progress. An alliance of European countries, after so many centuries of war and injustice, not only symbolizes that progress but helps guarantee it. Beyond that, the EU is as good or as bad as we make it. But that progress is part of my inheritance, and yours if you’re any kind of European. It’s certainly part of my sense of self. So that’s why I am here, at the kitchen table with my tea, watching the lights of the village across the meadow, and simply being a citizen here while I can. 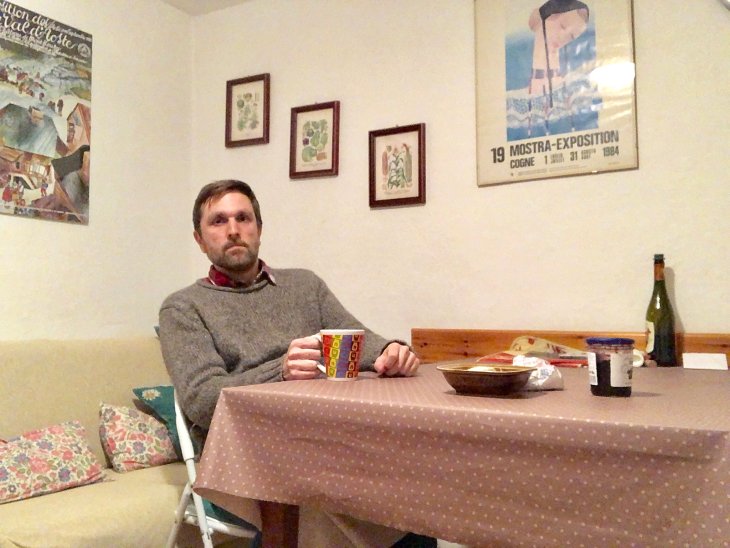 54 thoughts on “On the Loss of Citizenship”

This site uses Akismet to reduce spam. Learn how your comment data is processed.